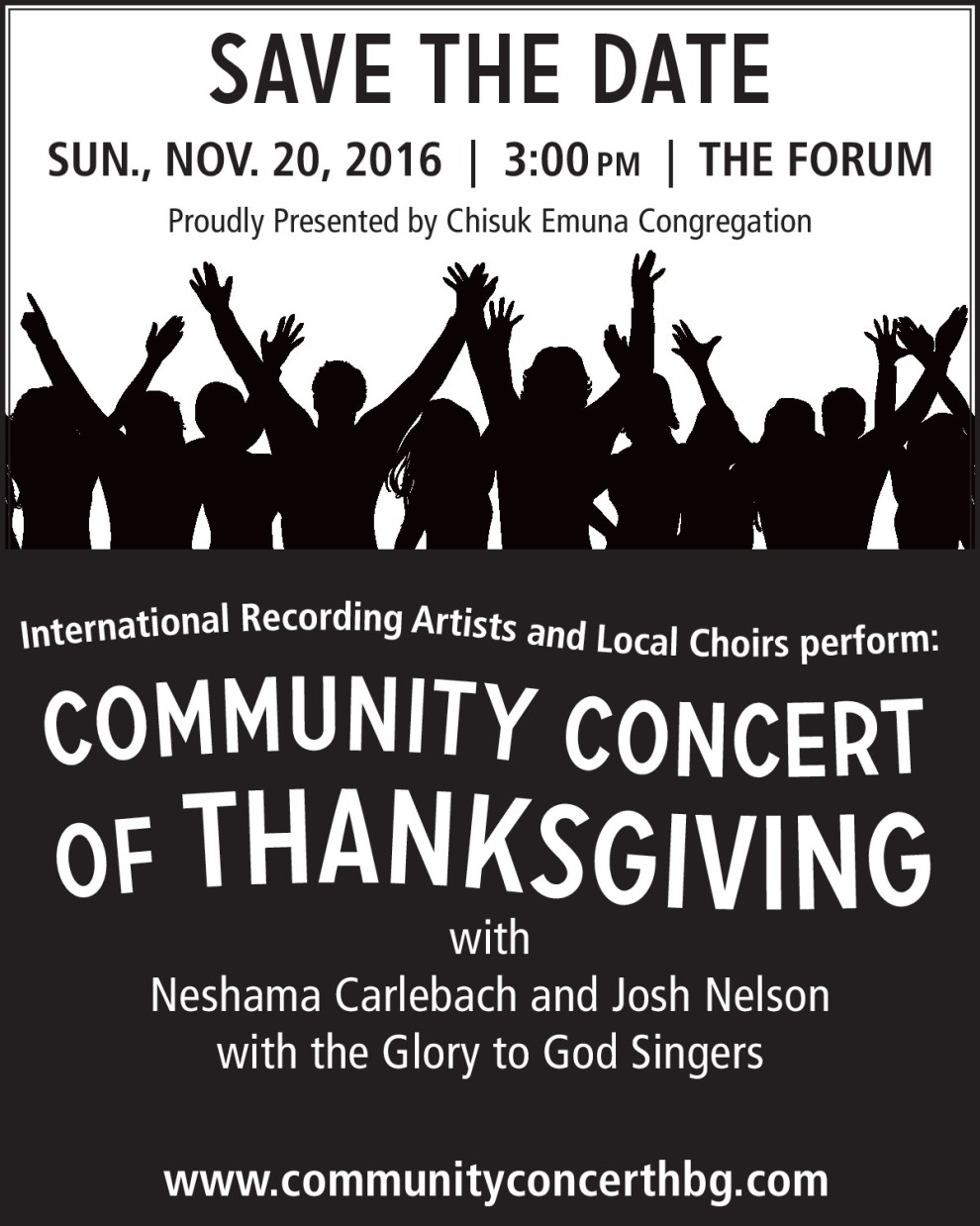 The universality and unifying power of music will be celebrated in a unique “Community Concert of Thanksgiving” on Sunday, November 20, at 3 pm at The Forum in Harrisburg, as multi-cultural musical traditions combine to promote understanding and goodwill. The concert will feature the unprecedented collaboration between Neshama Carlebach and Josh Nelson, internationally known recording artists and performers of Jewish music, and the Glory to God Singers, a gospel choir from New York. Members of local choirs will join them on stage, and a portion of the proceeds from the event will support homeless men and women, through Downtown Daily Bread, and children, through the work of the Harrisburg Public Schools Foundation.

Creating and facilitating relationships between multicultural and multi-religious communities is the monumental mission of Carlebach and Nelson. They performed together at the 2014 Climate March in New York City and continue to seek opportunities to bring their musical compositions and talents to the larger ecumenical world of music. Their collaboration combines two very different journeys and traditions into a moving and positive musical experience. Their voices and soulful messages come together to bring newfound unity; together they create a sound as provocative, boundary pushing, and intimate as those created by their musical and spiritual mentors, Rabbi Shlomo Carlebach and Debbie Friedman.

Neshama Carlebach, a leading superstar in Jewish entertainment, continues the legacy established by her late father, Rabbi Shlomo Carlebach, with a moving and entertaining performance that includes her father’s incomparable melodies and her own inspiring original compositions. Carlebach’s talent and charisma captivate and endear her to people of all ages, faiths and backgrounds.  She has performed and taught in cities worldwide, sung on the Broadway stage, and sold more than a million records.  She was a six-time entrant in the 2011 Grammy Awards.

One of the most popular performers and composers in modern Jewish music, Josh Nelson brings his extraordinary message of hope, unity and spirituality to concert stages and worship services across the globe. Nelson is a gifted multi-instrumentalist and songwriter whose work is celebrated and integrated into the repertoire of congregations, camps and communities around the world. He is a classically trained musician who is equally versed in rock, jazz and world music, combining his broad range of influences into a breathtaking musical style that is accessible to audiences of all ages, backgrounds, and faiths. Recently hailed by Time Magazine as a “Star of the New Jewish Music,” Nelson builds community with music, lifting up audiences through experiences that are at once energizing and deeply moving.

The Glory to God Singers is a New York-based Baptist choir that inspires and uplifts communities through its spirited energy and soulful voices.

Chisuk Emuna Congregation in Harrisburg, founded in 1883, is committed to building community through interfaith dialogue, partnerships and events. This concert is a demonstration of that commitment.