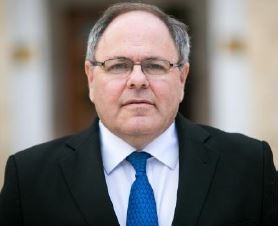 Bio: As Consul General of Israel in New York Consul General, Dani Dayan represents the State of Israel to communities from throughout New York, New Jersey, Pennsylvania, Ohio and Delaware. Nominated to this post by Prime Minister Benjamin Netanyahu, Amb. Dayan enjoys wide support and appreciation from all sides of the Israeli political spectrum. He has a long time reputation as an Israeli public figure, lecturer and entrepreneur.

Dayan was Chairman of the Council of Jewish Communities in Judea and Samaria from July 2007 until January 2013. He was instrumental in pushing through multiple reforms and policy changes to strengthen the image of the organization and advocate on behalf of its 400,000 citizens.

After serving in the elite MAMRAM computerized data processing center of the Israel Defense Forces, Dani Dayan began his professional career as a businessman, at the young age of 26, founding Elad Systems which specializes in sophisticated information systems, outsourcing, and facility management. In 2005, when Dayan sold his interests in the firm, it employed 500 IT professionals.

Born in Buenos Aires, Argentina in 1955, Dayan immigrated to Israel in 1971. He holds a B.Sc. in Economics and Computer Sciences from Bar Ilan University and M.Sc. in Finance from Tel Aviv University. He resides with his wife and daughter in the community of Maale Shomron in central Samaria.