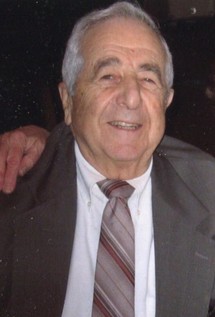 Al was born in Brooklyn, NY in 1923. He was a gifted student and athlete, trying out for the Brooklyn Dodgers at 16. Al was a fighter pilot in the Army Air Corps. He flew cover for the Enola Gay. After discharge, Al moved to Harrisburg and started Al Bryant, Inc. He traveled extensively, visiting six continents and also enjoyed golf, bridge, and community theatre. Al served as president of the JCC; co-chaired the Russian Resettlement for Ohev Shalom; and chaired the building committee for the Residence. He attained platinum status at SCORE, and he was president of Friendship Force, HCT, Leukemia Society, sub-contractors association, and Sertoma. Al was active with American Arbitration Society and Commonwealth National Bank advisory board. His legacy includes the Bryant Family Foundation which benefits the local community and the Endowment fund for the Residence, which Al established with Marcia. They received the Spirit of JFS award in 1998. Al was the beloved patriarch to his large family, sharing his wisdom, ideals, sense of humor, and love.

A Gift from his loving wife, Marcia Bryant