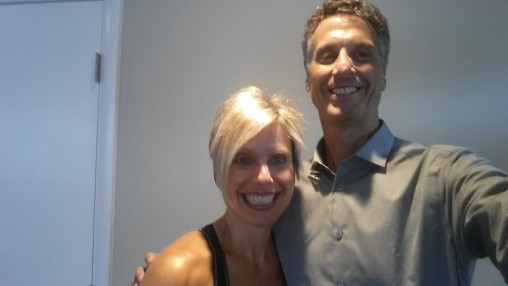 Vote for Bill and Gina

Gina is no stranger to dance competitions.  Under her belt she has two international wins including the grand prize in group African dance in Senegal at a government training site which brought the prestigious victory of bragging rights for the 1995 Ivory Coast Peace Corps group.  Then came the Cook Islands dive bar win in Polynesian Dance where the big blue drink prize was proudly shared with the entire audience.  She only hopes that with adding Bill to the picture, they can take a local win that actually comes with a physical trophy.  Gina can't say enough about the support she is receiving from her fantastic employer Capital BlueCross and her family of JCC cyclists, staff, and members.  One of her favorite critiques is by Peggy who shared that at least you and Bill look good together.  Nothing was noted about our dancing ability.  Gina only hopes to make her husband proud, and have her brother cheer her on while getting nostalgic about their Dolly Marazzo Dance Studio days in Pottsville, Pennsylvania.  Her 14 children will not be in attendance due to the regulations of way too many paws clapping at once.  The influence of this outstanding support may sway the judging and cause a disqualification.  Thank you much to Capital BlueCross and the Jewish Community Center for this opportunity of my two "work families" to come together!

Bill is a stranger to dance competition and to his dance partner, Gina, whom he first met at the organizational meeting for this event.  He always had an interest in ballroom dancing and started taking it more seriously about a year ago.  Julie Sherman’s effusive narrative of her experience convinced him to jump into the competitive fray, especially with the promise of the Capital Blue Cross fund raising machine behind the team.  Bill grew up in Harrisburg and played Iddy Biddy basketball at the JCC.  He has been involved at the Center over the years, participating in other, more grown up activities such as playing racquetball and serving on the Board.  Bill has been a lawyer in Harrisburg since 1983, having practiced with his father, Larry, grandfather, Lew, and brother, Craig.  He is now in solo practice on Devonshire Road.