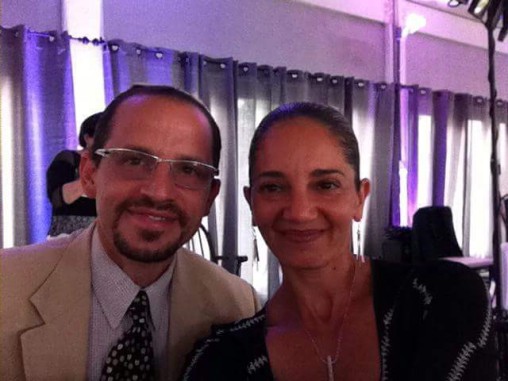 Vote for Moy and Seena

Seena and Moy were born in Mexico City and went to the same Ydishe shul in Mexique where they loved learning ydish since preschool. The problem is that they forgot almost all of it by now. They were part of the Mexican Jewish community that is a vibrant and very busy community with lots of Jewish schools and community organizations.
They grew up at the JCC in Mexico which is considered the largest and most complete JCC in the world.
Seena played tennis since she was 9 years old and she only stopped playing during her pregnancies. Moy has a mental image of Seena walking at the JCC as a little girl with her racquet bigger than her and her curls flying all over.
Seena has a bachelor’s degree in culinary arts and she won a scholarship to study French and tourism in Monaco, Monte Carlo.
She has done some TV work as a food researcher on PBS in Spanish and currently she is a regular guest on Good day PA and the editor of a bilingual newspaper La Voz Latina.

Moy belonged to a Jewish youth organization for years, and he became the leader at college age.  He has a BA in advertising and participated in a Master’s degree in Media Planning. He worked at the same media agency for 17 years, which lead to his dream job for any child: "my father works at a chocolate company", which brought them to enjoy this wonderful and warm community.
They met many years after school and he was transferred to Guatemala shortly after that. She begged him to marry her and she moved with him to Guatemala. They also lived in Miami where their two precious and full of energy kids, Orit and Meyer, were born. They have been in Harrisburg for more than 2 years and they love the community, their friends, the Silver Academy and they get involved with love in everything they can.